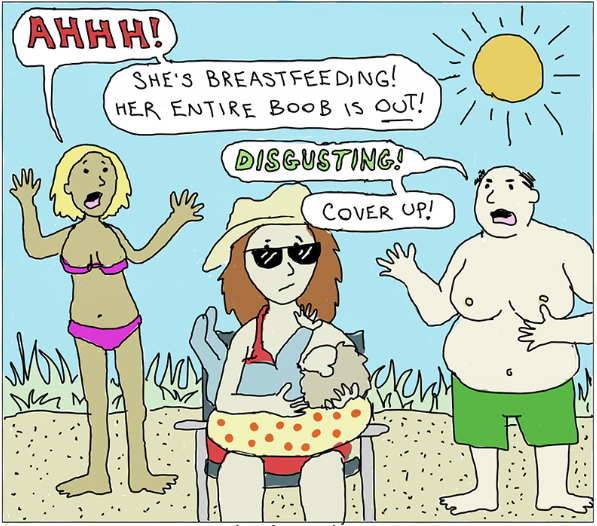 I think I’ll start my “side of the bed” on breastfeeding in public with a little story. This story does not belong to me, but belongs to a close friend who gave me permission to share it. I can’t imagine the way she must have felt in this situation because to say I was enraged to hear this would be putting it gently. For the purpose of anonymity, we will call this person B (and no, that is not the first letter of her name. C’mon guys).

B is a first time mom with a happy, healthy, adorable, exclusively breastfed baby. She was heading out of town to visit family and was traveling alone. This means she packed up and made the long drive to the Atlanta airport, unpacked all their stuff from the car, checked in, & headed for security, all with a 6-or-so month-old baby in tow. That alone should have won her a gold medal in my opinion.

So naturally, since it’s been about 3 hours since the baby last ate, he is hungry. B is stuck in the ridiculous marathon of a security line, which is miserable for anyone, and the baby is screaming because he’s hungry. B is fumbling around with her bag, the baby’s diaper bag, carseat, and obviously, the baby. She starts to nurse him because that’s what you do with hungry babies- you feed them. You can’t explain to an infant that they just need to hold on for 45 more minutes while you drudge through this long ass line. That’s not how it works. You just feed the them.

As she has just finished getting the baby latched and he’s finally happily eating away, an airport employee approaches her and tells her she cannot nurse him there. WHAT! Is that even allowed?? He tells her that she must wait to get through security and use one of the new “nursing stations” that the airport has in a few of their terminals. So she obliges & stops feeding her (hungry) infant and continues to struggle through the line until she can finally get to a “nursing station” about an hour later.

There are so many things to say here.

First- I just want to preface any further discussion by saying that I have been around B nursing her baby many times and you can never see any part of her breast. Not that it would be inappropriate in any way even if you could, but with a nursing tank top on and a loose shirt over it, there is literally no skin showing while the baby nurses. You’re bound to see more skin & boobage from teenage girls or desperate cougars walking around the airport than you are a nursing mama.

Next, while I commend Hartsfield-Jackson Atlanta Airport for *trying* to be nursing friendly by adding “nursing stations”, I think it’s safe to say they failed nursing moms & babies in a huge way. First of all, the “nursing stations” are tiny, claustrophobic, porta-potty-like bubbles. B described it as having bright florescent lights with the nice feel of a quarantine room. Not exactly the ideal atmosphere to settle down and feed your baby. Secondly, if installing a handful of “nursing stations” means that we can no longer breastfeed anywhere else in the airport, then this move was clearly made to appease those who are uncomfortable with breastfeeding, NOT to support breastfeeding mothers. Nice try, though. Really.

Beyond all of this, though, is a much bigger issue. Why is breastfeeding in public taboo? Literally everyone else eats in public. I can see your food while you eat. If you’re eating brussel sprouts (which ARE actually disgusting & I don’t want to see them), you’re still not going to hide under a sheet or go eat in a bathroom stall, are you? No, no you’re not. And breastfeeding moms & babies shouldn’t have to either. If you see a nursing mama, rather than being uncomfortable about heaven-forbid seeing a little breast, see the mother that is doing what is undoubtedly the best thing for her child.

Breastfeeding is a beautiful, natural thing that has been around since the beginning of human existence. It is indisputably the best, most perfect nourishment for our little humans & is something that should be celebrated and encouraged. It’s a hard enough world out there with very many real social issues that need to be addressed. Let’s focus on those leave our babies to eat in peace.

Cheers to the booby milk. 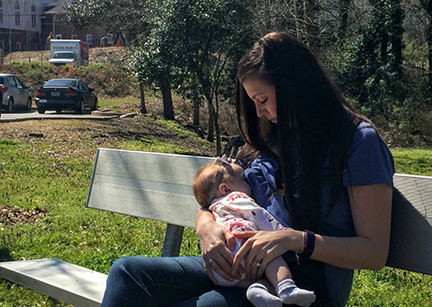 I had originally started writing a sort of scathing bit about rude individuals making unsolicited comments and judgements to breastfeeding mothers in public, but decided to change course mid-stride and take on a new strategy.

The reason for this change is twofold; I felt very strongly that something that needed to be written was going to be lost in all of the jokes, and also I read my wife’s blog last night and she pretty much already covered everything I had written… with the authority of an actual mother of a nursing baby. So, yeah. My thoughts in that regard are pretty much echoes of an actual mother. I can’t add anything to a dialogue on breastfeeding that way, so I’m going to take this one in a new direction. END_OF_DOCUMENT_TOKEN_TO_BE_REPLACED